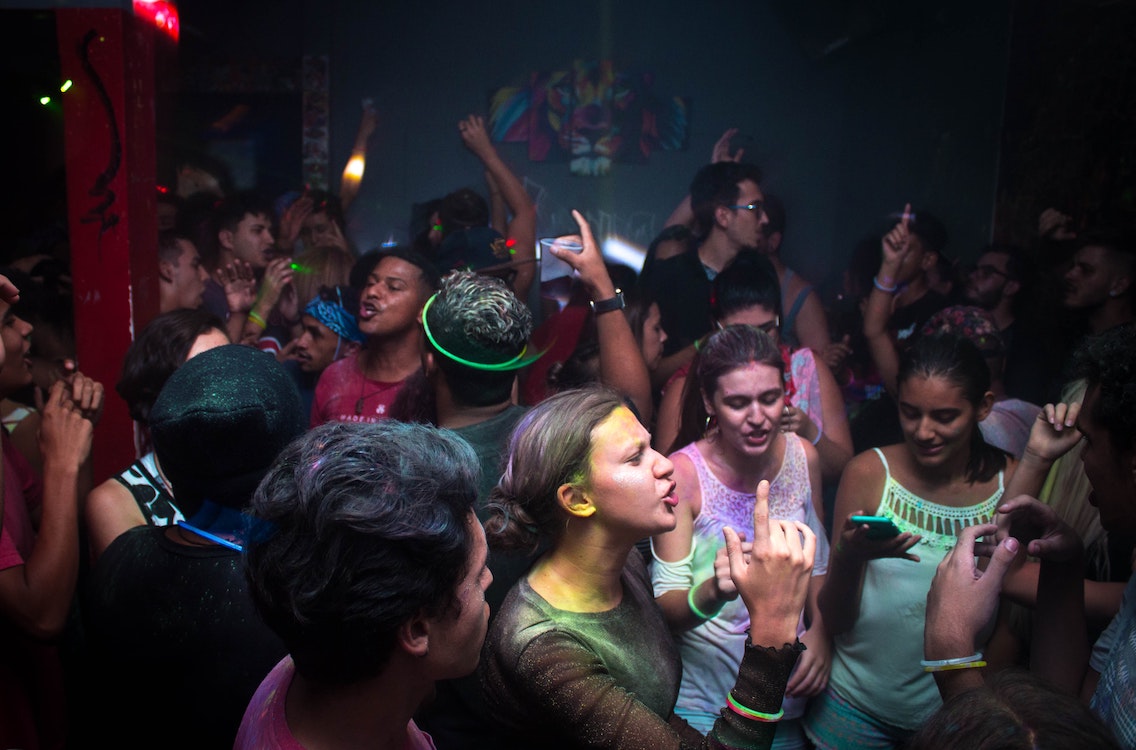 “I’ll take a pound of foie gras…some of your finest olives, and 3 pounds of your best brie,” Sharon ordered from the deli counter.

Deb grabbed one of the olives. “What happened to chips and dip?”

“There’s lots of money to spend when you’re not buying alcohol,” Sharon explained.

“What?” Deb frowned, “No alcohol at one of your wild parties?”

“I didn’t say there won’t be any alcohol. I’m just not providing it. It’s going to be “BYOB”.”

“That’s a new one,” Deb was surprised.

“Especially Farley and Larry,” Deb added. “They really get out of control.”

“Mascara…?” Deb’s eyes popped. “For my earthy friend who wears sandals in winter? Is there someone I should know about?”

“Well…this cute guy Greg will be at the party. Can I borrow that black dress of yours?”

That night, Sharon’s house was bursting with music and rowdy people.

Farley raved as he sauntered in with Larry, carrying several cases of beer.

A few hours later, people were sprawled all over the living room.

“Pssst….Deb,” Sharon whispered. “I’’m going into the den to talk to Greg. We’re soulmates, I just know it! Can you keep an eye on things?”

The party got even wilder.

“Gee, some of these guys are pretty bombed,” Deb worried. “But I don’t want to disturb Sharon…”

Farley stumbled over to the door with Larry. “It’s getting a little too quiet around here. Time for the real partying to start.”

“Shouldn’t we say goodbye to Sharon,” Larry slurred his words.

“Nah…we’ll see her tomorrow at work…”

She ran to Sharon. “Farley killed someone on the highway! They arrested him for drunk driving.”

“It gets worse! The victim is suing you for letting him drive drunk!”

Are you in need of a lawyer?
Ahlstrom Wright’s lawyers have extensive experience in all areas of law, except Criminal.

Larry’s victims were furious. “Sharon knew of Larry’s drinking habit. She should’ve paid attention to his alcohol intake, just like a bar mustn’t let someone leave drunk and drive.”

“But I’m not a bar!” Sharon argued. “I didn’t even serve alcohol. It was BYOB. This is Larry’s fault alone.”

Is Sharon responsible? You! Be The Judge. Then look below for the decision.

“Not liable,” held the Judge. “Sharon didn’t provide the alcohol and she didn’t know how much Larry had drunk when he drove away. Even though she knew he was a big drinker, it wasn’t her duty to monitor his drinking at a BYOB party.”